The North Lawrence–Monroe Street Historic District was a 2.8-acre historic district in Montgomery, Alabama. It comprised 132–148, 216, and 220 Monroe Street and 14, 22, 28–40, and 56 North Lawrence Street, containing a total of six contributing buildings. These buildings were significant in that they housed African American businesses during the era of segregation, making this a commercial center for African Americans in Montgomery. The businesses played a supporting role during the Montgomery bus boycott in 1955–56 by providing dispatch and pick-up services. The district was placed on the National Register of Historic Places on August 30, 1984. The entire block was subsequently demolished in the mid-1990s to allow construction of a parking deck for the RSA Tower. 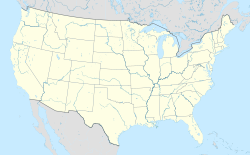