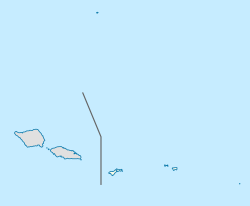 The Courthouse of American Samoa, formerly Administration Building, Navy No. 21, is a historic building near Pago Pago Harbor in Fagatogo, American Samoa. It is a two-story wood-frame building mounted on concrete piers, with a two-story veranda on three sides. A concrete vault is located at the back of the building. The court house was reported by the local commander to have been completed about 1904. It housed the offices and other facilities from which the United States Navy administered the island from its construction until 1952, and was where advisory councils of the island's indigenous leaders were held. The building is one of the oldest standing in American Samoa, having survived typhoons and other perils. 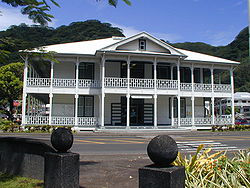